“OF ALL THE BOOKS IN THE WORLD, THE BEST STORIES ARE FOUND BETWEEN THE PAGES OF A PASSPORT”

I caught myself reminiscing about my visit to Poland recently and thought now would be a great time to share what I got up to whilst I was there!  First stop was Krakow followed by Warsaw. I was drawn to Poland for its history, but upon arriving, I fell in love with everything about it. I can’t wait to revisit one day!

Don’t miss the opportunity to visit the Wieliczka Salt Mines when you’re here. This experience was one of the highlights of my time here (close behind Pierogi’s). The mine was built in the 13th century making it one of the oldest salt mines in the world. Today, there are dozens of statues and four chapels that have been carved out of the rock salt by the miners. There is a chapel, and a reception room that is used for private functions, including weddings. It can get really busy here, so if you can, join a tour group or book tickets online!

Krakow is a city you could spend hours aimlessly wandering and gawking at the incredible architecutre. One of these architecturally stunning buildings is The Wawel Royal Castle. The Wawel Royal Castle and the Wawel Hill constitute the most historically and culturally important site in Poland. It was, for centuries, the residence to the Kings of Poland, but is now one of the country’s finest art museums. Be sure to take a walk around Wawell Hill and check out the different tombs and chapels around.

This southern Poland city near the Czech Republic is known for its monuments and cultural treasures including the Jewish Quarter, the Cathedral & Royal Castle on Wawel Hill and the Old Market Square. It was here that my love for Polish Pierogi’s was born! If you are traveling to Poland, you need to try these delicious dumplings – they will change your life! You can find Pierogi’s at most restaurants, however there are a few chain restaurants including Zapiecek, that are know for their Pierogi’s. One evening we went for dinner and watched a Pierogi cooking demonstration and enjoyed a traditional Polish meal – would definitely recommend this for any foodies out there!

The main market square in Krakow is Europe’s largest medieval square, surrounded by churches and palaces, dating back to the 13th century. In the middle of the square sits Cloth Hall. On one side of Cloth Hall is the Town Hall Tower, on the other side, are the Church of St. Adalbert and the Adam Mickiewicz Monument. There are always beautiful market stalls operating in Cloth Hall, so if you have time, definitely check them out! Plenty of great spots to sit and enjoy some Pierogi’s too!

One of Poland’s ‘holy hot spots’. Be sure to make a stop at the 14th century Jasna Góra Monastery, where the famous “Black Madonna” is kept. It’s a good way to break up the journey and there are plenty of lunch options and amenities close by.

The most infamous former Nazi concentration camp is just outside the city of Krakow and although it is quite a dark and depressing part of history, I think it is important to learn about what happened during World War II and to educate people to ensure it never happens again. Auschwitz consisted of Auschwitz I (the original camp), Auschwitz II – Birkenau (a combination concentration and extermination camp), Auschwitz III–Monowitz (a labor camp), and 45 satellite camps.

The capital of Poland with it’s varied architecture displays how this city has been all about survival, literally being burnt to rubble, then picking up the pieces and starting all over again. Warsaw has a thriving nightlife and music scene. It is a city of culture and art with some of the best Museums and festivals in Europe.

The name is a bit of a giveaway, but the Old Town in Warsaw is the oldest part of the capital city. It is one of the most prominent tourist attractions in Warsaw and includes the Royal Castle, Zygmunt’s Column, Church of St. Martin, Cathedral Basilica and the Old Town Market Square.

I’m not a HUGE museum person, but I was told to visit the Uprising Museum during my time in Warsaw. It is a museum dedicated to the Warsaw Uprising of 1944. It collects and maintains hundreds of artifacts, ranging from weapons used by the insurgents to love letters, presenting a full picture of the people involved. There is an Observation Tower offering panoramic views of Warsaw from the top of the building. There is an incredible 3-D short film on the ground floor (from memory, you have to pay extra to watch, but it’s worth it! WATCH IT!). The graphic six minute film shows the pile of rubble that was once Warsaw from an aerial view – it is amazing!

Łazienki Park consist of the largest park in Warsaw and the Łazienki Palace. The park is 76 hectares and is situated in the central district of Warsaw. The palace itself is built on an artificial island that divides the lake into two parts, a smaller northern lake and a larger southern one. You could easily spend your day wandering through the gardens and touring the palace. Pack a picnic lunch and enjoy the stunning scenery in the sunshine! 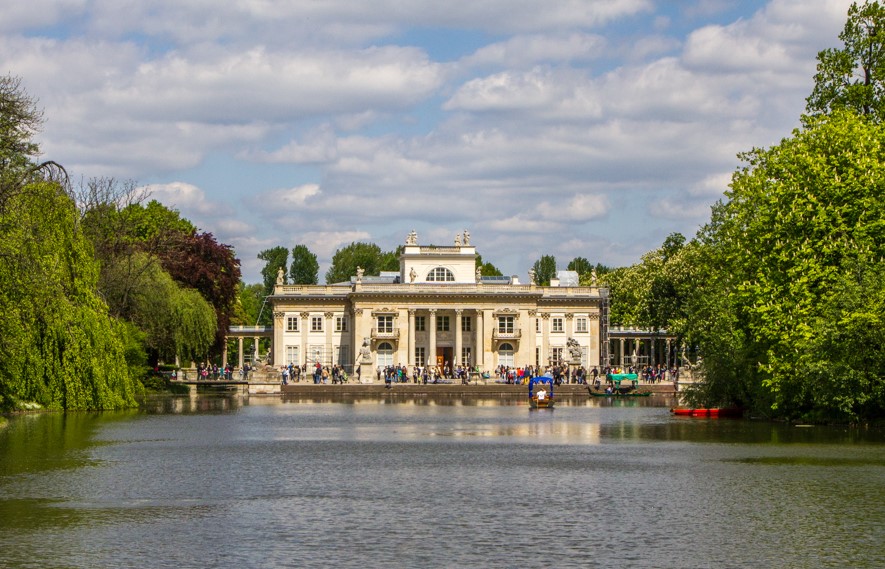 The Palace of Culture and Science is the tallest building in Poland, standing 237 meters (778 ft) tall, including the structural 43-metre high spire. It is still a controversial topic for Poles as for many people it remains a symbol of almost 45 years of Russian suppression after World War II. There is a viewing terrace on the 30th floor. In a height of 114 meters you can have a nice view over the city of Warsaw; it is a popular spot in the summer time to watch the sun go down (Friday & Saturday).